Snake in the Chicken Coop! 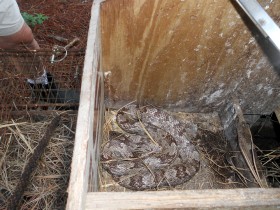 Did you read about the Snake in the House a week or two ago? Well this week Fred found the parent in a nest in the chicken coop. That was on Thursday. Fred tried to grab it and get it in a bag but it was too big, strong and quick for one person. And just think how much fun it is to walk into a chicken coop at egg gathering time knowing there is a snake roaming around.

Now this is a non-poisonous oak- pine- chicken- rat- (take your pick) snake, however, it can bite. Well Friday morning Fred went out to look for it again. It had picked another nest well covered with straw. It was just waiting for the chicken to drop an egg into its mouth, I guess.

With heavy gloves, snake grabbers in hand, a large empty feed bag and racing hearts we two brave souls set out for the task. I did get pictures before and after but not during. It was early in the morning when snakes aren’t moving as fast so they say. Snake didn’t know that rule.

We did grab it but it was not a pretty site. This time it was wrapping its tail around Fred’s arm. He had it in his hand and I had it with the squeeze grabber thing. We dashed it into the bag without getting bit.  It is now at the front of the property meeting new friends. I’m told snakes are not territorial and will not find its way back. Do you think Mr/Mrs Snake does know that rule?

Christine’s note: we published more photos on our Facebook Page and in the Gallery.