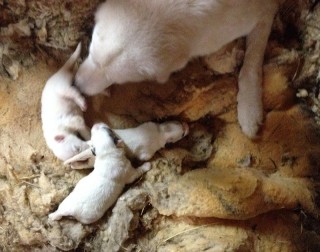 Well we have both, but we’ll tell you about the puppies first. India has two girls and a boy. The girls are all white and the little boy has badger markings. We notice the markings fade out as they mature but a hint is always there.

The markings do help with identification to some degree. It is sometimes hard to tell Chuckie from Chipper and Bucky, the three guys we kept from the last litter. They’re all about the same size but each has a special personality. Bucky is the loner and does well in a field as the only guardian dog with the goat boys – thus the name Bucky. Chuckie (named after the evil doll) is just a little ornery but not mean of course. Then there is Chipper (chip off the old block – he acts like his dad.) He is Chuckie’s buddy. They seem to be happy working as a pair.

The incubator has earned its keep this year nurturing keets – baby guineas.  The only cost is a electricity, my time and a little water. It takes 28 days for the eggs to hatch. I turn the eggs and keep water in the unit because they require humidity. We have hatched about six batches this year. There are always lots of pearls (grey), a few lavenders and a fair number of white. 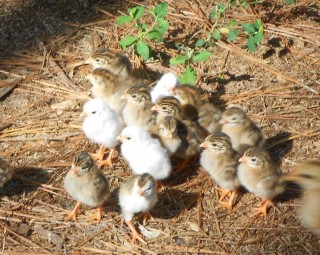 We normally keep them in a cattle trough with a heat lamp until they’re old enough to go out into the coop. Big mistake – we put them out a little early this year and Fred found an oak snake wrapped around four of them. It had already eaten about five. So the snake got chased away and we brought the rest back up to the screened porch for a while..

Most folks have nice chairs, tables and such to enjoy sitting on their screened porches. Ours are often filled with keets, chicks, pups, goats and lambs. Of course, there have even been times when some of these were in bathtubs in the house. My daughter has commented that any place else that may be a surprise but not here.

Guineas earn their keep by eating insects. No ticks in our yard and we haven’t had army worms either. I’m told they have been bad this year. We sell most of the keets but like to keep a few to add to our free range flock. They’re a hoot to watch. They get a bum rap about making noise. It’s a myth about them hollering all the time but they do lay around in the driveway and stop cars as folks come to visit. They pair up in the spring and come back together as a group in the fall. Normally they sleep in a tree by the chicken coop but even with those little bird brains, when the weather gets cold they are smart enough to go into the coop and gather around the heat lamps.