The Year of the Girl! 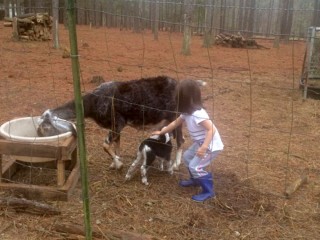 We have sixteen new goat kids so far and only two are males. I’ve been told that nature knows when there are too many little males and gives us all females. Sounds like an “ole wives tale” to me but I’m happy.

The photo on the left is of Lacey, her newborn and our local ‘goat whisperer,’ Mimi.

We have a healthy and active group of Mini-Myotonic newborns. All so cute! It is fun to go out and find new ones in the mornings. Several singles this year with two set of twins. I like to keep them on mom about three months since they are so little. They will be available late March as registered pets. Come and see them sometime. We love to show them off.

The next two photos are of Frederika with her newborn, then a brown mamma we haven’t named yet. 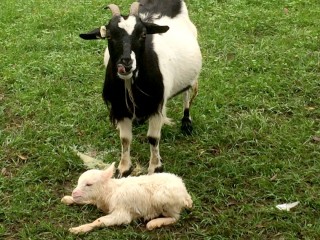 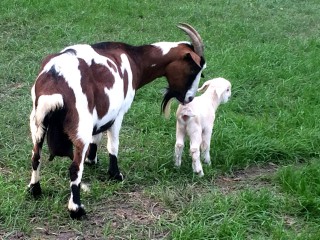 The other group of eight is commercial, which means we’ll use them for breeding stock and meat. We have used a Kiko buck this year and several females are Kiko so they are pure offspring. My others are Spanish, Myotonic and Nigerian. The goal is to breed for parasite resistance. This is going to be a rough year with all the rain and warm weather so it will be a test to see how the program is working.

The Kiko buck we used was white and most of the little ones look like him. I now have another boy just a year old. He is rust colored and will give us a nice group for the upcoming year.

The sheep are still hanging on. One was born in early December and we haven’t seen another one since. However, they are showing signs or else I have some really fat sheep.