The Chicken or The Egg? 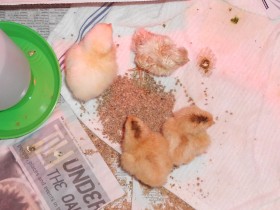 Well it is prolific egg-laying and chick-hatching time. There are two hens sitting on big piles of eggs they are nurturing. I’ve confiscated a few odds and ends here and there to put in the incubator right along with nine peafowl eggs I’m trying to hatch for a friend.

Recently daughter Marcia brought me the single guinea keet that she had hatched. It joined a batch of keets that a hen here at the farm had hatched. There were nineteen to start. I tried to let mom take care of them but keets are fragile when young and the pile kept getting smaller so I took them away from her. Now they are safely in an elevated pen until they can fend for themselves.

But back to the chicks. I had ten eggs in the incubator and today three hatched out. Two more are working on it so I expect there will be more peeps by tomorrow morning. Marcia also brought me a nifty home-built brooder. It is on the front screened porch with a heat lamp to maintain about 98 degrees for a few days. Works great. I just keep adding chicks as they hatch out.

How’s this for a ready made omelet? A three yolk egg!

This photo was from a friend of Marcia’s. She has a few chickens and shares her eggs. The friend cracked the large egg and expected to see two yolks which is not that unusual. This is what she found.

Now a few months back, I gave Marcia six hens because we had too many here. She had about six that she bought at the her local feed store. The debate now is just which hen laid that egg. I’m sure it was one from from Golden Acres, however, Marcia says, “Oh, no! That egg is from one of my girls.” Since I’ve never had it happen here, she must be right. Doggone! I wonder if it could have been triplets if it had hatched?

It is so much fun to watch the daily interaction of all the hens and guineas. We get some of the guinea eggs too. Yes, they are good to eat and nutritious. The guinea hens all lay in a single pile and finally one will decide it is time to raise keets. It is a 28-day commitment but they are persistent. The biggest issue being guineas hide (so they seem to think) the nest in strange spots and are vulnerable to our resident fox. We try to find the nests so we can raise the keets ourselves.

Speaking of eggs and snakes, Marcia sent this photo of a snake in her hen house. This one is different that the snakes we often have to move. Ours have a diamond pattern. We think this one is a Common Garter Snake.

Is anyone out there a snake expert? This one was moved to a far part of the property. Can it find its way back to the chicken coop? We don’t kill any wildlife and this one has a snub nose which I’m told it means it is not poisonous?

Needless to say, we all look closely before reaching into the nests to collect eggs.