Stuff about Mayhaw Berry Trees and the Festival 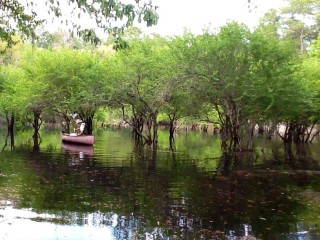 Well here it is one month until the eighth annual Mayhaw Berry Festival. Looks like we will have a good crop this year. I was out in the pond layering some branches trying to start new trees from some of my favorites. It is hard to do with one hand. The canoe kept floating away with all my supplies. I finally got smart and asked Charissa to bring me a rope so I could tie the canoe to my waist. She took the picture from the shore.

Now this is my first venture with “layering” so wish me the best. Good friend Melinda, and knowledgeable I must add, showed me the steps. I may be a little late but no time like the present to learn something new. I have transplanted seedlings in the past around the farm. Most are growing nicely, however, I don’t know which berries or how much they will produce. I may use them as root stock in the future. Mayhaw trees take six to eight years to actually produce fruit. Most of these are in the fourth summer so it will be a while before I know what I have. The mayhaw tree doesn’t grow big so they make a nice landscape plant whether they produce berries or not. They tolerate water well but do not have to be in water as many folks think. They do best in full sun for producing berries.

The reason mayhaw trees are found around water is because they cannot tolerate fire. Natural or controlled burns will destroy the tree. The heat itself is enough to kill it. There are farms that grow the tree in orchards and they are treated like any other fruit tree. I have had some berries from cultivated trees and they are much bigger since they have been chemically fertilized. Like some over-prodded food, I think they have less flavor and produce a weaker juice than the natural berry, however, I am no doubt biased. Apples and tomatoes are examples of such products. They have often been engineered to look pretty and ship well but are not as flavorful as the naturally grown variety.

Now about the Mayhaw Berry Festival. 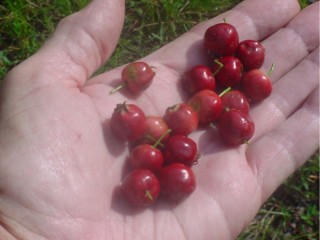 I have to guess which weekend will be best. Sometimes the berries are ready late April or it could be mid May. Last year we had the festival early and I thought there weren’t going to be any berries. You can see what they look like in the photo.

A grandson was practicing capitalism and selling canoe rides in around the Mayhaw Pond. Late Sunday evening he came and announced there were berries floating on the water. Monday morning we started our harvest.

Thus the date this year is a week later  – Saturday May 10 and Sunday May 11. Announced time is 10:00 AM to 4:00 PM but we are pretty flexible. If that weekend doesn’t work for you, check with us to see if berries are ready and come whenever it is best for you.

We harvest as soon as the berries tell us it is time to get out the crew and equipment. Definition of Crew – Anyone handy that will put on waders and join us in the pond. Are you available?

Have you seen the YouTube video? If not, please go to https://www.youtube.com/watch?v=fh6AcoyMiHs or copy and paste if the link won’t work for you. Please press “Like” and share with a friend. 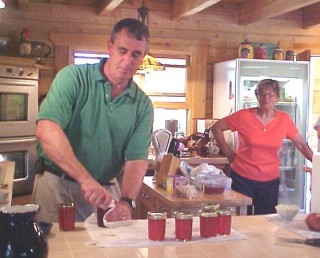 Friends David, the guy in the photo and his brother Charlie Ward, not in the photo, are the main “real people – not actors” in the production along with a critique of the jelly by Jack Carswell. You will see Fred doing a bit walk through toward the end. I was off at a meeting of some type.

The production of the video was done by David Neck. It is called Making Mayhaw Jelly but there is more gathering and producing the juice than actually making the jelly. David likes to guard his special secrets. There are nice views of the Mayhaw Trees during a dry year and our log home. So enjoy please.

Making Mayhaw Jelly – Part Two is soon to be in production. With a little arm twisting and calling on his desire to have his name in lights, David has agreed to appear in the second production of actually making the jelly. He has graciously held jelly making demonstrations during Mayhaw Berry Festivals in past years and shared the secrets with a select group. Now the secrets will be revealed for future generations.

I will give a tip or two for speeding up the process. David will unashamedly brag that his unaltered jelly is really the best since I use pectin to speed up the process. He may have an hour or two to stir jelly but I sure don’t.

Watch for more information next issue – Vendors, Pets, Hayrides, Food, Demonstrations, Beautiful Florida Weather and on and on and on………………