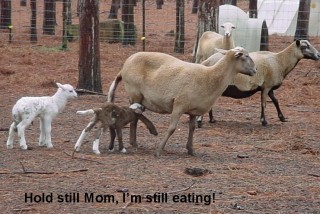 Lambs started arriving in January. Not as many this year as we would like but those out there are growing fast and furious. Next week we will start tagging and weaning from mom. Lots of baaing going on for about three days and then all settles down to the new life.  The males are separated first and we let the females stay with mom a little longer. She generally weans them herself. These cute little things grow fast and are able to fend for themselves quickly. Their goal in life is to eat, sleep and eat again. 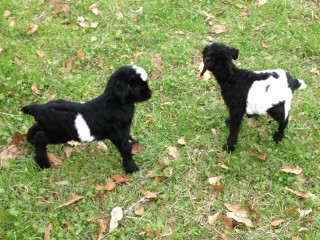 Then there are the goats. The kids started their starring appearances in February. More may have been born last night but at last count there were nineteen. The miniature Tennessee Fainting Goats have seven on the ground. Four of those are males. They’ll be wethered (neutered) and they will be great pets.

There are several more momma’s out there with bellies as big as basketballs. These are such charming little goats that it is hard to sell them but they will be on the market in a couple of months.

Our chickens have been laying steadily for several months. Not a lot but better than in previous years. Egg laying increases as spring meanders in and the days get longer. Also, new chicks have arrived. It will be four to six months before they start laying and hopefully they will take us through next winter. Our first group are Turkins or Naked Neck chickens. They are unusual looking but prolific brown eggs layers.

We have a great variety of hens and our eggs vary in color. Nutrition studies suggest that all eggs are the same no matter the color but I really like the brown. I guess they’re just pleasing to the eye. However, the difference in farm raised free range and commercially produced sure look different. I’ve never seen a study suggesting nutrition difference but put one of each in a skillet look at the difference.

Our Florida Department of Agriculture Poultry Agent gave me a lesson about how to determine a hen’s egg laying ability. They all stop after a certain time and it doesn’t behoove us to keep hundreds of non-laying hens about.  We have a friend who comes and takes those that are not producing and prepares them for his church meal program. 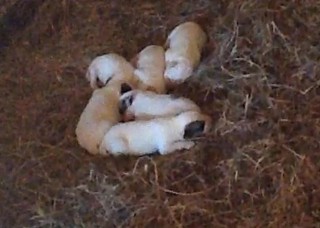 PUPPIES YEAH!  India and Roper finally produced for us. India, of course, did most of the work with Roper laying around complaining about how tired he is. Since they were born, he has been a trooper and maintains guard outside the barn where India protects and feeds the boys. Yup six big boys all hogging mom’s attention. There were two little females not developed enough to make it. It will be eight weeks before they are ready to go to new working farms. One is already spoken for. We can’t sell these guys as pets. They just get too big and never loose their instincts to work. That includes roaming large areas and the nocturnal predator bark. Neighbors would hate you.