Kudzu and the Escapees Part 2 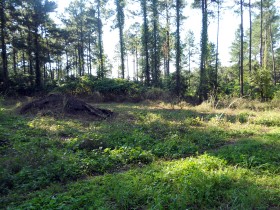 The continuing saga…it turned out that David Ward was closer to the correct timing than I was. It took only seven days to clear the first one-third acre of kudzu and blackberry brush. I guessed two weeks and he said four days. We found out the hard way that it was time for the goats to move to another spot. Of course, I’m waiting for an appointment 35 miles away when the phone starts to vibrate in my pocket. Uh oh, the goats are out. Lucky for us Daniel was on hand and with the help of Dr Ward’s housekeeper the escapees were soon captured. They are now working on the next section which is mostly blackberry, mimosa and small oak trees. Probably time to move the fence again.

Six more sections to go and then start over. The only other way of clearing this much terrain is by controlled burn but that is too dangerous with a residence close by and just off a major highway. Herbicides are too costly, ineffective and environmentally unsound. Kudzu will eventually die off if intensely grazed. So the goats have a job for a few weeks to come. Most of the brush will be gone by the first freeze and when the spring arrives and flush growth the goats will start again.