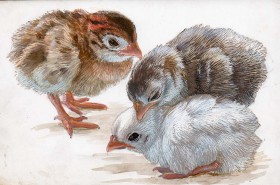 What a surprise I had this week. They weren’t expected until around August 18. My friend found a nest that one of her guinea girls had been sitting on out under a brush and thought it had been about 5 days so they had 23 days to go. Sue was concerned momma guinea and potential babies would be eaten by marauding fox or neighborhood stray dogs. So she fixed me up with a basic incubator and instructions. I dutifully set up the equipment, adjusted the temperature, added warm water and turned the eggs twice or more a day. I went into their nice warm shelter (utility bathroom) to check them last Tuesday and there were broken egg shells and little fuzzy things running all around inside the incubator. A few eggs had not hatched so I left them all be and by the next morning there were seventeen little ones and one egg shell to go. My friends Melinda and Bob came hurrying over to get photos. When she picked up the egg she could hear peep, peep, peep so it quickly went back into the humid warmth of the incubator. Melinda is accumulating photos for drawings to go into her soon to be published book – The chicks are in the mail and other farm sketches – by Melinda Copper.

It is fun to watch Bob and Melinda work together. They brought a 10 gallon aquarium over (no water) and placed the keets inside and in the sun. Bob lays on the floor and photographs from every angle. Melinda then completed the drawing  shown.

By-the-way, the last little one finally broke through and joined its brothers and sisters. It is a Pearl which will be grey with white dots all over it. There are seven and these are the most common. There are also seven white, three lavender and one looks like it will be cinnamon or light brown.