. . . . .since our last conversation and a lot has happened. I was worn out after the Mayhaw Festival. It is fun to do the harvesting and have everyone come but it is always nice to get back to normal. Well, normal for us at Golden Acres Ranch. 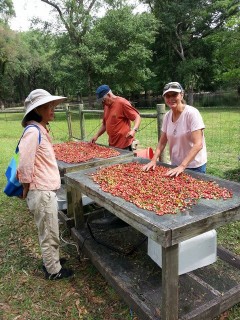 We had lots of help this year which made it even more fun. A family of six, Mom, Dad and four young boys came in their RV on Wednesday before the festival to help and gain farm experience. They stayed through Monday to help with clean up and that was really appreciated.  Two other folks, in separate RV’s, were traveling through and stayed also. They did most of the packaging for us. We are hoping they all will consider coming again next year.

The family of six has been traveling for about a year. Their motivation was to have more family time and provide the boys with experiences they were not likely to have staying in a permanent neighborhood. I had specific jobs lined up for them when they arrived – feeding the chickens, bottle-feeding Gus the goat, taking care of the puppies three times a day, picking up sticks and other miscellaneous chores. All did the assigned jobs well and without complaint. It was a pleasure to have them here.

The other two helpers traveled all over the country in tandem, looking out for each other but able to stay independent if need be. They helped us and spent spare time in our great little city, Monticello. There are plenty of antique shops and a couple of locally owned restaurant, plus our art gallery, old jail museum and several public historic buildings. We are also close to Thomasville, Georgia and Tallahassee, Florida. However, we encouraged them to stick close by and help spur our own economy.

I’ve been collecting, washing and carding wool from our sheep for over two years. The utility room and several other storage areas are becoming overloaded with the accumulation. It is so much fun to see it develop from the dirty stuff that comes off my sheep to a clean white tuft of fluffy wool. This wool is from Florida Native sheep and not the fine stuff desired by the serious knitters and crocheters. It is adequate for my needs and so far has been used to fill a handmade baby quilt – and that’s about it. I’ve also sold some that was washed and carded to another wanna’ be spinner. This is all no-brainer work and slopping about in dirty sheep wool water is therapeutic for sure. Just a cut above making mud pies as a kid.

I have plastic storage containers outside and put the dirty wool in it. I let it rain, swish it around, empty the dirty water and let it rain again. If I feel industrious, I’ll fill it up with water from the hose. After a bunch of times, I spread it out to dry in the sun. Ah, nature at work. At that point, I bring it in to soak in hot water and Woolite. This gets the real stink out and prepares it for carding. Carding is a process that disentangles, cleans and intermixes fibers per Wikipedia. Now to the next step… actually spinning. 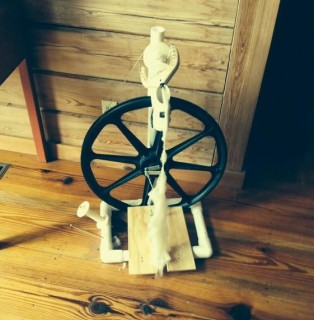 I bought a used PVC pipe type spinning wheel called a Babe and decided it is time to learn the process of spinning. My friend Alice met me at Jefferson Art Center here in Monticello to give me a lesson. She patiently assisted and you can see some of my very rough beginnings hanging from the front of the wheel. There will be lots of lumps and nubs in my first efforts. I’m told that is part of the beginning process.

Alice is a talented spinner and weaver and I’m sure my fumbling sent chills up and down her spine. Alice came to our Mayhaw festival this year to demonstrate how it should really be done. Our visitors were fascinated by the process.

I was given some cotton straight from the plant and Charissa acted as the cotton gin and pulled all the seeds from it. Someone gave me small batches of some really nice fiber from bunnies and alpaca. Recently a friend called and has some camel hair for me to use. So it is time to get peddling. Hmm, now what am I going to do with all the spun wool? Well. . . .to be continued.