Notes from the North Slope

Cloistered in the industrial monastery known as the ‘North Slope’ oil field of Alaska, comes now a few observations from a visiting sinner. Let us pray…….. 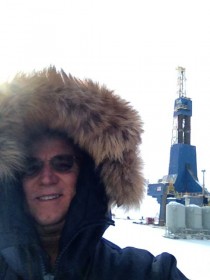 A ninety minute mostly empty flight from Anchorage on board Repsol’s chartered Alaska Airlines aircraft brings me to the start of an adventure in the 2012 oil field culture. A row all to myself, I stretch out and watch the snow covered Alaska March below, passing under my window as the Alaska Range, the Yukon River drainage, and the Brooks Range slide by slowly to our south.

No adult beverages are served on the northbound flight to Deadhorse, only on the flights bringing workers south, off and moving away from the work clock are two carbon fragments again to be had. The North Slope is a ‘dry’ environment. Let the working Lent fatten our souls and assuage our livers. I sip on the last of the decent coffee I will taste for awhile and meditate on random thoughts.

Disembarking in Deadhorse with my giant cordura nylon bag of issued arctic gear and swimming inside my XLT parka, I shoulder my additional personal gear and step out into -30F ambient air to board my bus to ‘K-1.’ The bus driver warns “If you need to use the restroom, please go now. It is two and ½ hours to K-1.” For fear of yellow breath down the road, I pay the coffee bill as best I can.

The road to K-1 winds west through the flat snow covered tundra and by an occasional sprawl of crude oil handling infrastructure; modular power plant looking structures with exhaust stacks billowing out wedges of steamy white smoke. These crude oil collecting and pumping facilities are surrounded by off the ground modularized personnel living quarters and giant garage type sheet metal shed facilities. Miles and miles of dull silver pipes supported above the snow by rusty horizontal I-beams atop large round metal posts run parallel to the frozen roadway and tie these infrastructure enclaves to one another across the tundra.

“A rig is moving” offers the bus driver, “I hope we don’t get stuck behind it.” I learn the giant oil drilling rigs are portable and move around on the slope slowly, very slowly. Moving from drill site to drill site until each one’s hole is done, they take up the entire width of the road, allowing the traffic that clumps up on either side of these movements to pass only when the oil rig is inching by an occasional roadway pullout that will allow the traffic to squeeze on by and around. We get lucky and approach the glacial paced rig at a pull around. “We could have been behind it for hours” says our driver relieved.

We see a half a dozen red foxes wandering on the tundra at different points along the way. One comes onto the road and directly up to our front before steering it’s way on by us. Slope wildlife literature reports most of these fox are rabid. They have no apparent fear of vehicular movements.

We arrive at K-1. I am directed to the medic’s room and settle in at the ‘Kenai Camp.’ I do get my own room with a bathroom, not everyone does. In the hotel star rating system, it would get two. I check the medic gear and report to the ‘Company Man’s Office.’

ON THE JOB TRAINING 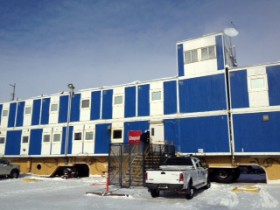 Kachemach #1 is a ‘wildcat’ exploratory oil well drill site located approximately 80 miles west of the main staging ground for the Alaskan North Slope oil fields; Deadhorse, Alaska. This is where I am spending the best part of three weeks.

Google Earth, at our location right now, shows an aerial view that is late summer/early fall in color without a trace of what is presently here on top of the all white ground. Still a sense of the geography can be had.

Our little portable drilling village is housing 80 or so people. The drilling rig is Nabors ‘9ES’ and the two portable living quarters are the ‘Chugach Camp’ and the ‘Kenai Camp.’ All this was moved here after the tundra froze up in January and will be moved away before it thaws out in May. The high temperature on this same day is -13F. The well will be closed down for summer and fall, and then Repsol will return next winter. The village will be rolled back in after next year’s freeze up. This is a Repsol project. Repsol is Spain’s big oil company.

Repsol has joined others in the Alaskan oil industry to explore for more. Alaska is a new environment for them and being a part of their first season’s operations in active drilling is definitely interesting.

Hired as the site’s remote medic, I have also been given three days of training on the software program ‘OpenWells,’ used to manage and share data related to oil field drilling and production. My title is Rig Clerk/Medic. I am basically an administrative assistant to the drilling site supervisor when no one is sick or injured which is fortunately, most all of the time.

I am working a noon to midnight shift, which usually goes until 2AM (5AM Houston time) as I am responsible to produce a ‘Daily Drilling Report’ to be posted on MyWells, distributed to an email list, and also transferred to Madrid, Spain via ‘Citrix,’ the OpenWells computer network. We are told of a ritual that revolves around our report every morning at 6AM in Houston, Texas, Repsol’s US HQ. The banana hits the fan if our report is not there.

The drilling site supervisor is called ‘The Company Man,’ he calls me ‘the rig cluck.’ Everyone here has clever nicknames. There is the ‘Toolpusher,’ the ‘Mudman,’ the ‘Driller,’ the ‘Roustabout,’ and the ‘Directional Driller,’ among others.

Abbreviations are a way of life on the oil field. And everything is to be in capital letters in the Daily Drilling Report. PULL OUT OF THE HOLE becomes POOH, TRIP INTO THE HOLE = TIH, MEASUREMENT WHILE DRILLING = MWD, HEAVY WEIGHT DRILL PIPE = HWDP, LOGGING WHILE DRILLING = LWD, BOTTOM HOLE ASSEMBLY = BHA, PICK UP = PU, LAY DOWN = LD, TRUE DEPTH = TD, TOTAL VERTICAL DEPTH = TVD, and the now famous BLOW OUT PREVENTER is the BOP. The list of abbreviations goes on and on. Schlumberger has an oil field abbreviation app.
IANMTSU = I AM NOT MAKING THIS SHIT UP.

The mud gets ‘circulated and conditioned’ a lot. Drilling is said to be ‘making hole.’ A drilling activity line entry in OpenWells can read “RUN IN HOLE – CIRCULATE AND CONDITION FROM BOTTOM UP – POOH.” 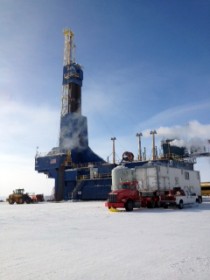 ”Hey Mud,” hollers the Company Man as Bob, ‘Big Mud,’ the day shift mudman walks by the office door. “What is our mud weight right now?”

I am learning about drilling mud. Drilling mud is injected into the drilling pipe to be ejected out the end of the drilling bit assembly to ‘lubricate the hole,’ being then pushed back up to the surface under pressure along the outside of the pipe to lubricate the hole and carry ‘the cuttings’ (the formation being drilled) back to the surface. The cuttings are then separated from the mud and the mud is reused. There is an entire industry in support of and connected to this ‘mud operation.’ Truck loads of drilling mud come onsite from Deadhorse and truck loads of cuttings go offsite to Deadhorse.

Each night around midnight I get a mud report from the night mudman (‘Little Mud’) and enter ‘Mud Inventory,’ ‘Mud Check,’ and ‘Mud Volume’ data in the OpenWells Daily Drilling Report. ‘Mud Losses down the hole’ are a big deal I learn as I sit around in the inner sanctum of the Company Man’s office and take in conversations about mud. I have never been around so much mud talk. I learn there are even ‘Mud Schools.’ Mostly in Texas I gather. On the oil patch, mud is big stuff.

A mud intrigue ensues for a few days revolving around magnetic mud suspected to be stuck to a high tech tool called a ‘CRW’ (Combinable Magnetic Resonator) that was lowered into the hole to measure the fluids in the formations up and down the hole. Steel Seal (a mud additive) has graphite in it and is rumored to be sticking to the tool and causing its malfunction. This ‘wireline logging’ is an expensive process: two invoices totaling over 1.2 million dollars for seven days of this work is given to the Company Man during this period of intrigue. The Mudmen, both ‘Big and Little Mud’ are being accused of mucking up the process. Steel Seal had been added to the mud to stop ‘mud losses.’ The factions are many. There is Schlumberger the wireline logging contractor, there are the Canrig Geologist contractors, and the Nabors Drilling Company Contractors are in the mix. There is a Repsol reservoir engineer in-training onsite injecting ideas into the debate. Everyone has a mud theory about what has caused the CMR tool to malfunction.

Eventually, a one gallon plastic bucket full of 3 to 4” slivers of metal shavings are brought to the Company Man’s office and spread out on a piece of cardboard. These slivers were cleaned off of the CRW tool and are thought to be from when the drilling pipe threads were cut and not cleaned properly before being delivered here onsite. “I think there is some graphite mixed in with this stuff” chimes in a magnetic mud conspiracy proponent, refusing to give up the mud fight.

‘Mud losses down the hole’ are a big deal. I figure what the heck, you drill a hole deep in the ground and put mud in it and not all of it comes back to the surface, so? I learn mud losses are from injected mud leaking into the formations along the wall of the hole and can be a precursor to the dreaded ‘blowout.’ One option to deploy when mud loss is occurring is by placing ‘LCM PILLS in the hole.’ These ‘loss control mud’ pills are chemical mud concoctions designed to seal the walls of the hole and stop mud losses. Managing the mud is an important deal around here.

A mud weight debate breaks out between the Schlumberger employees and the mudmen. The on duty Repsol oil field supervisor comes by to mediate.

The debate fades and the attention returns to the drilling rig for running casing in the hole.

My first go at OJT rig clucking is drawing to a close. I head back to Anchorage on Good Friday. After church on Easter, I look forward to lifting a ‘Rusty Nail’ to end this chapter of my industrial LENT.

Never mind the mud for now,

“The liver is evil, it must be punished.”