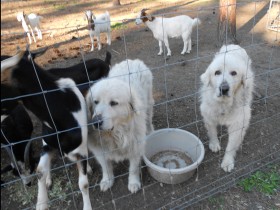 We get a lot of questions about our guardian dogs. There are five with various jobs and personalities to fit. I thought this might be a good time to introduce them and explain why they are so valuable to us. We have Ben and  Woody (pictured left), Siggy, Gracie and India.

In the past we have always had rescue dogs, from our first family dog, a neighborhood stray named Smiley, to the indoor dog pets now. Some were given to us because they were unmanageable, that would be our Yoda, or adopted from the local shelter, and that is our Sugar and now the latest addition being one of our son’s dog called Gadget.

So back to the guardian dogs. These are dogs specifically bred to guard small helpless animals and they will take to guarding children. So if you want them to guard your animals, don’t let your children play with them. They need to be with the goats or sheep from the start.

Great Pyrenees will grow to be big, woolly, charming and intimidating dogs. They are not good indoor or small yard pets  especially since they are nocturnal by nature with a deep bark that is used to let intruders know they are on guard. Now that “intruder” could be a bunny rabbit, a squirrel, or the neighbor’s little fluffy that has come out to do his business.  That bark in a small back yard under your bedroom window is really irritating.  Neighbors tend to call the police about the disturbance.

This breed also does not adapt well to indoor living. We knew someone that tried to keep their GP indoors while they went on a day trip. They came home to a window sill torn off. We helped them find a suitable home for the dog. Great Pyrenees love to romp and play in the rain and cold. They dig large deep holes in the summer to cool their bodies. None of this is suitable for city living. They need a job and lots of room.

We brought Ben and Woody to our farm about seven years ago and they have always been with goats. They live in a pasture 24/7 and stay with their charges. These dogs don’t herd. They just go wherever the goats go. During hot weather they sleep in their self-made cooling holes that are often so deep we cannot see the tops of their heads. But let a bird of prey fly over or someone come around the pasture and they are up and on guard. They stand just a few feet back and use their intimidating bark to let strangers know not to come any further.  At night, we can often hear their booming bark off in the distance keeping the coyotes and bobcats at bay. These two have always been a team and one guards while the other prowls.

Siggy belonged to friends that had goats but needed to change their lifestyle.  We knew his background so we bought him. He is the same age as Ben and Woody and actually came from the same breeder. He is our breeding sire and the dad of India. We sold other pups from two previous litters. Siggy has the same disposition as Ben and Woody and stays with his charges 24/7.

Gracie and India, the girls. Now these two are not as low key and reliable as the guys. Gracie is a roamer and we have to keep her in a secure fenced area during the day. We bring her up to one of our enclosed porches at night. She is our outside house guard dog and seems to relish the job. India stays with Gracie during the day in a big run but we let her roam the farm at night. She works between the house the barn and the chicken coop mainly helping to keep the fox away.

Their expression is elegant, intelligent and contemplative. Each one has something specific to do. They all eat only once a day and allow us to groom them as needed. In the ten years we’ve been here and had the dogs, there has only been one predator incident with the goats or sheep. Until India started working the yard we often had to deal with a fox in the hen house. These dogs are an important part of keeping our farm in good order. We couldn’t do it without them.