We are watching all the Ewes (female sheep) and Does (female goats) get fatter and fatter. Most look like they have implanted basketballs on their sides. Our calendar says the first are due after November 15. Once they start we have surprises almost everyday.

We are always hoping for twins or triplets but some breeds consistently produce only a single. Those would be our Florida Natives. They’re a wool breed and survived many years without human intervention. It is easier for mom to take care of just one on her own so the breed seems to be more apt to have a single.

The sire I have was on a cattle ranch that was 20 square miles and the sheep were left to run wild. I think they were shorn once in a while but never chemically treated. Those are the genetics we are continuing to nurture in our flocks and herds. 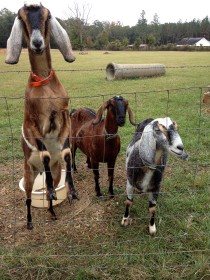 A friend just gave us four Nubian dairy goats and one is a male – no milk from him. However, he is the sire of the kids expected in February and March. This will be our first venture with milking. I’m not sure how that all works but we trying to figure out the best ways to do a good job.

The three girls are sweet and friendly. The male is a little feisty so we’ll have to see how that goes. I’ve heard plenty of tales about how “Grandpa’s buck always chased me across the pasture.” I think this guy falls into that group. His hair stands up anytime Fred goes near. We give them their hay and water from outside the fence. He seems to feel less threatened when I get around him.

Getting ready for Thanksgiving

Phil arrived from Texas yesterday and will be around until after Thanksgiving. Ken, Val, Hanna and Colter will come over from Tallahassee. Jim, Rissa and Sarah are flying in from Alaska. Another guest, ole’ Tom Turkey will be coming from Heavenly Homestead out of Lloyd. He reservation was made last spring and will be ready to join us this coming week. Sweet Potatoes, Cranberry Sauce, Pecan Pies are just a few of the trimmings.

We wish you all a Happy Thanksgiving!