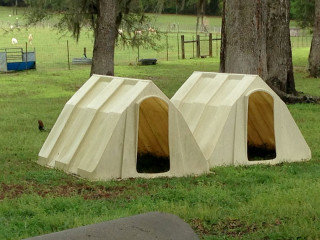 Those that have been here before have seen the EZ A-Frame Hutches we keep in the pastures. We have them available particularly for the goats. They hate to get wet.

They are also nice for the dogs both in the pastures and particularly in the kennel yards for boarding dogs.

They are light color so it keeps them somewhat cool in our hot summers and rain off when needed.

These shelters were first made for pigs. They have a larger footprint than the former Calf Hutch.

The A-Frame configuration makes them ideal for goats since they can’t use them to jump out of the pastures. That’s how they became my goat hutches about 12 years ago.

They are just about indestructible but best of all they are easy to move. I just roll them over to a new patch of grass and the goats have a clean bed.

We are a distributor here in the Southeast. If you are tired of mucking out permanent housing, come look at these.