Dairy Goats and Lots of Kids 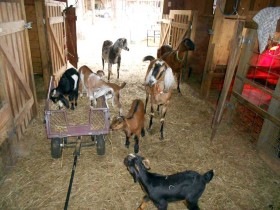 I had to help Queenie with the boy he was so big. I saw she had the first one on the ground and cleaned up but noticed that she was still in labor. Too much time past for my liking, so I dragged Fred out to hold Queenie while I played Dr. Pol (he’s the newest reality show veterinarian). Once he popped out – that’s the kid not Dr. Pol – the third one, a little girl, came right along behind him. That is Queenie watching her kids play on the hay wagon with a friend. They are supposed to eat the hay not play on it.

Both mom’s were very attentive the first few days then seemed to lose interest in having that many little mouths to feed. We’ve had to intervene. Now we put each momma on the milk stand with feed. Since her head is restrained and she has no choice, she’ll let the kids nurse. Both moms let them nibble throughout the day but we separate them at night so mom is quite willing to let them eat a full meal first thing in the morning.

The next fun thing was taking all six kids to the veterinarian to be dis-budded. The buds of their horns are burnt off. That’s common practice for dairy goats so they won’t hurt each other as they get bigger and more competitive for feed and the milking stand.

Meanwhile, we had one mom that had a congested udder and could not nurse her little one. That’s one bottle baby. Then during our four days of rain one of the mommas died right after giving birth to twins. They were cleaned up, fed and in a shelter out of the rain but she was gone when I went out to check on them.  We didn’t do a necropsy so we don’t know the cause, however, that was two and three now being bottle fed. We hate this to happen but it is part of farm life. Most of the animals do very well on their own. Considering we have well over 100 goats and sheep there are just a small percentage that have problems.

The dairy goats seem to be very “needy” and require more attention than most. Thankfully our good friends and goat milking mentors, Melinda and Bob Copper, have graciously helped us figure out things. They have shown us how to milk so eventually we will wean the kids and we’ll have our own supply of goat milk to make cheese, yogurt, kefir and milk to drink. Doesn’t that sound exciting. Fred is out of his mind with joy.

Then two more. Saturday morning, March 16, when we went out for the morning farm chores Fred discovered that Princess Isabella had given birth that morning. She had already done her motherly duty. They were properly cleaned and fed. We put mom and kids in a stall by themselves for a few days with a heat lamp since it is still cool and wet around here. They are all faring nicely. The kids are now up and bouncing around with all their bigger cousins.

It is now time to tag ears and wean goats and lambs. We did the goats last Monday. The boys are separated and in a pen by themselves. We let the little girls stay with their moms. Next week we’ll be separating sheep and lambs. Elmer our sheep shearer and hoof trimmer will be here from Iowa. He will help us work the group that is pastured in Madison at B O’Toole’s Herb Farm. Then he will come here to work the group at Golden Acres. That’s forty ewes and separating thirty plus lambs. Lots of baaing going on when all this happens.

Next I have to schedule dis-budding for these last two little ones and on and on it goes.