We finally moved the chicks from the house utility room bathtub to a large container in the barn where we can keep a heat lamp going. They need warmth for the first few weeks. Momma usually takes care of that when she puts them under her wings, but there isn’t a momma big enough for the clutch of fifty chicks so we do it artificially.

Now they are in the coop running and hopping around trying out their wings for flying. It is great fun to watch them develop into future compost producers. There is also a momma hen with her six offspring.

Hens will hatch any egg in their nest. I put a couple of guinea eggs under her and she stayed on the nest long enough to hatch one. The other five are chicks. FYI – chicks take twenty-one days and guineas take twenty-eight. Momma clucks and they all come running to her and mimic her scratching in the dirt for some special tidbit she’s found.

We’ll keep them all cooped for about three months and by then they will be too big for the hawk. Snakes are the current worry. We can catch them after they’ve eaten an egg or chick because they are too fat to get back out. Just hate that though. I don’t mind the egg so much but don’t appreciate my cute little chicks and guineas being eaten. Last year a fox dug into the coop and caused havoc but this year India, our female Great Pyrenees, hangs out by the coop and barn every night so the fox hasn’t returned.

Kids in that belly

The Grazing Golden Girls are still hanging onto their kids. We haven’t had any new babies born since the twins about two weeks ago. It is painful to watch the potential moms run around looking like they are going to burst. Every morning and afternoon we make a run through their pasture expecting to see little ones on the ground but so far it has not happened. Most goat and sheep producers are certain the does and ewes hang on until the most inopportune time just to torment us. I don’t see a hurricane or cold snap in  the near forecast so who knows what they are waiting for.

We have Ben and Siggy, two of our male Great Pyrenees guardian dogs, in that pasture to keep a watch over them. They are good at hanging with mom when she gives birth. Once we had to take a twin from between Ben’s paws. He was guarding it while mom was busy with the second kid then he’d bark at her every time she’d try to get to it.  He was fine once we got it back with the momma. 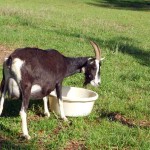 These are such gentle dogs but sure know when to go into predator watch mode. They lollygag and sleep in big holes during the day but let a hawk or buzzard fly by and they are up and on watch. Every night we hear that soothing woof, woof, woof as they prowl the acreage watching for things that go bump in the night. I still caution that these are working dogs and do not belong in a house or city back yard.

P.S. I was just outside sitting with a friend and saw another baby goat. At first, I thought it was one of the twins and it was separated from its mom and brother. Of course, I didn’t have a camera with me. Looks like it is about 20 hours old. Up and bouncing around and with a full tummy. Checked it out and it is a girl.