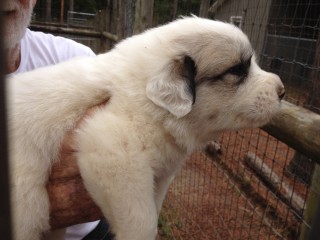 Puppies are growing quickly and go for their 6-week check up in a few days. All have been spoken for but I know two other farmers that had Great Pyrenees and they have a few left of their litters.

We will be putting all the pups out with adults to let them become accustomed to the environment. They already share space with goats and chickens. They are expressing their arf arf now. It takes a few months to develop the woof woof that keeps the predator away.

Pullets in the Coop 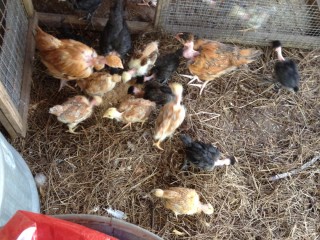 There are 32 Turkens or Turkins – either spelling seems to work –  and yup it’s a breed of chicken. There are no feathers on their necks and they are somewhat ugly, however, noted prolific brown eggs layers.

There are 40 other pullets (little hens) being nurtured for an upcoming egg laying contest. I bought a mixed group to gather comparisons between breeds. Which lay most eggs over the longest period of time?  Lots of fun right now since most are black with just small variations of white on black. I’m hoping they look different as adults. If not, I’ll just have a bunch of black hens that lay brown eggs. 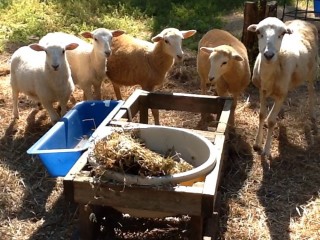 Lambs and  kids born since January are maturing rapidly. We have weaned a few lambs. They have finally settled into their new environment. They baa until they’re hoarse. Mom calls a little but she seems happy for the alone time.

Mini-Myotonics (Fainting Goats) are still too young to wean. Some are already sold. There were 3 girls and 5 boys this year. All cute and make great pets.

When they run around and chase each other it looks like a school of fish being chased by a shark. My neighbor tells me how delightful it is to watch them jump and play. She wants some of ours in her yard until they start to stink. Then she wants to give them back. What a deal.

Charissa is working on her Hay Bale garden. It is a first adventure for her and we are looking forward to lots of healthy vegetables in the coming months.

Look closely at the photo. Green things growing there. She did well supplying us with lettuces for our salads during these last few months.

There is an ongoing debate about whether to use hay or straw. Yes there is a difference. Here in Florida we have ready access to pine straw but not much of the straw that is commonly used for these gardens so we do hay. We have to find a source that is not sprayed with a herbicide or it won’t work for us. Details, details, details. When it works it is great. We’ll keep you posted.

End of the Drought 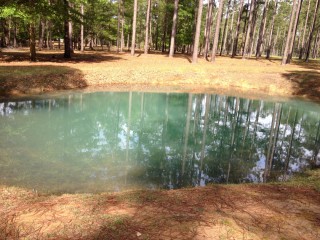 After many years of drought, it is great to see the sinkhole in the woods finally at peak again. Since this is about 35 feet deep, it was strange to see it empty during the last few years of drought. It did gives us a perspective of just how bad conditions were.

However, there is a saying about being careful what you wish for. We now have an over abundance of rain. Farmers spend a long time and lots of money to get a crop in the ground. They watch it grow and look forward to the harvest. Now fields are too wet for equipment and farmers are struggling to get the crop out and to market.

Too wet or too dry, when the farmer struggles we all feel it eventually.