Is it hot and rainy enough for you?

The Mayhaw Festival has come and gone and was a great success. We had official counters this year and totaled 457 visitors over the two days. Yeah! for my great friends and family who jumped in and helped.

We have the jelly on hand in our Country Store and still have frozen berries for those of you that like to make your own. Check out the “How to Make Mayhaw Jelly” video if you are feeling brave about giving it a try. 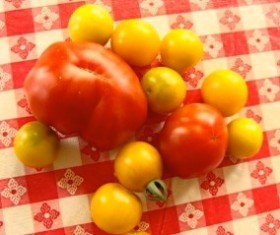 Over these last few months, our little garden produced beans, green peppers, tomatoes and squash. Now I’ve never pretended to be a gardener but it was fun to walk outside and pick some fresh veggies for dinner. I’m getting braver every season and keep adding to it. We may even grow our own corn next year.

Daughter-in-law, Charissa, is a master at cooking vegetables as well as most other things. Charissa loves to fish and when she has a catch she cleans and prepares a wonder meal for us. Imagine that — fresh fish, our own eggs and vegetables. We’re eating much healthier for sure. Well except for the homemade ice cream with blueberries, peaches or caramelized figs, or the flan or a mayhaw cake. No not all at the same meal but often enough to cancel out the bragging about healthy meals. 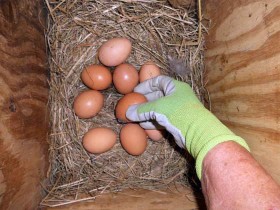 The hens took off laying eggs for a month or two or maybe even three. I can’t remember when they actually started the annual molt. However, they are back in full swing now. We have to pick them up quickly each day. There is a lot of competition with the local snakes.

We are incubating keets (baby guineas) and will probably have 30 or more looking for new homes. These are the best natural insect control anyone can have. It’s a myth that they make noise all the time, however, once those stories start there is no stopping them. Mine roam the farm everyday and come to a tree by the chicken coop to roost. Most visitors don’t even know they’re around until one or two come meandering by. Their real value is tick control. Comical birds with little heads. They are the classic ‘bird brain’. 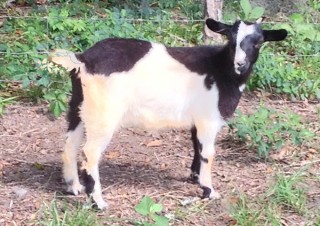 We had a nice group of Miniature Fainting Goats born this spring. Most have gone to new homes. I find it hard to let them go. They are such sweet little things and so cute. The girl in the photo is Jinx. She is sporting a Phantom of the Opera mask.

One of my friends had to close his goat ranch down because of his health and now I have his herd. These are standard Fainting Goats which are a few inches taller, broader and heavier than the mini’s, but have the same disposition. What great pets they are. We do love to show them off and welcome tours of the farm. It is best to email me to set a date and time. You can reach me at  bobbie.golden@gmail.com.

Now, I can’t leave out the dogs and our other goats. We have seven Great Pyrenees helping guard all the livestock. The youngest are two males called Duffy and Mac that I bought from a friend. We still have two females to breed and I wanted another line. These guys are still young and have not fully taken Ben and Woody’s place in our heart. They are getting there slowly. 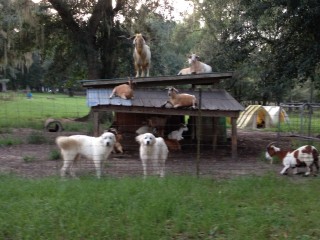 This group of goats are the crossbred does (females) They are some mix of Myotonic, Spanish, and/or Nigerian. There is a Kiko buck added to the mix, too. The focus is to breed for hardiness and parasite resistance. I’m expecting the Kiko buck, standing on the roof, to add a lot of size to the next group of kids. Can you see those horns? They spread about three feet across. We don’t have to worry about him getting his head caught in the fencing. Oh, and he is very gentle. As you can see they climb on the shelter and play King or Queen of the hill every day.

The dogs are nine months old and still silly. They are gentle with the goats and poultry but occasionally try to play with a chicken that happens to be wondering in the pasture. They chase it around a bit. We yell at them to stop and then they give us that “Who me?” look.The chicken goes happily running off.

It is interesting to watch the dogs when they are on guard. We have water birds come and go in the pond. The cattle birds, I think they are egrets, along with the chickens and guineas that pop in and out of the pastures eating insects. These are generally ignored by the dogs. However, let a hawk or buzzard fly overhead and they are up and stalking. They never let a prey type bird land.