Chick Brooders Before and After

It’s good to know how to improvise what’s needed. Remember the makeshift chick brooder we’ve been using for the guinea chicks? A free-standing tub in a back porch, a heat lamp and thermometer. Messy, smelly and inconsistent temperatures, but it worked well enough for the guineas.

Well, now that we know we can, we decided to go for convenience, and it’s been great! We ordered 50 chicks a few weeks ago. Did you know they come in the mail? The chick producer texts us when they ship and we make sure we can go pick them up the moment the post office calls. There’s a limited window for how long the chicks will survive in the box.

We had assembled the new brooder the day before so we were ready. The brooder is a large, square metal box with some great features. We put it in the tool room so we could better regulate the temperature. The new chicks need to be at 90 to 95 degrees, and the brooder comes with two blue, heat-producing bulbs. We put a small heater in the room as well. The tool room has a window for light, and we removed the gas-powered tools because of the fumes. Here’s a video. 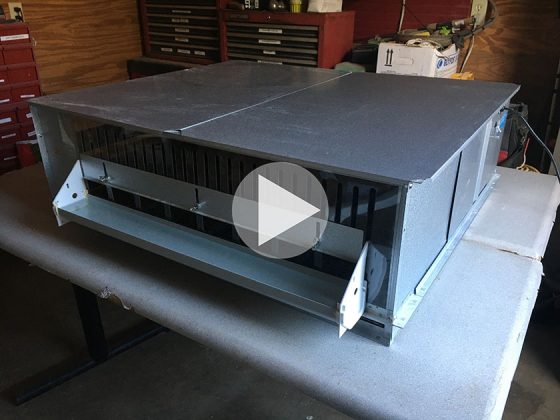 The video shows feeders on three sides of the chick brooder, one of which we used as a water container. Chicks and chickens will poop anywhere, so these feeders let them stick their heads out instead of walking around in their food and water. We adjusted the space for their heads as needed. For the first week, even the smallest opening allowed the chicks to get out, so we did put the feeders on the inside for a short time.

You can see it has a thermometer easily accessible. And a sliding door to open in the back. Moving the tops of the brooder panics them a lot, so we check them from the door.

Inside, the chicks walk on a grate that (mostly) lets the poop fall through to a paper-covered tray in the bottom. We changed the paper daily.

There were two ‘huge’ chicks in the batch we got. The company we buy from always asks if we want an ‘exotic’ chick. Usually, it’s a rooster. But maybe this time, it was these two large chicks. Well after the first week, we realized they couldn’t get their heads out of the small openings needed for the other chicks, so we made a coop with a heat lamp in one of the barn stalls for them. They did just fine by themselves. In week three, all the chicks had grown so big, the brooder was too crowded, and the smaller breeds were getting pecked on by the bigger breeds. So we moved about 20 of the chicks to the barn brooder. 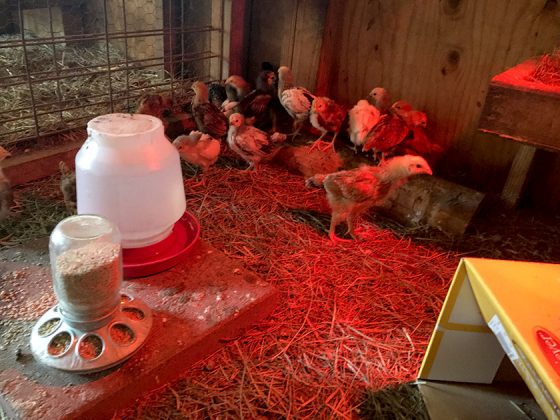 They did great for a week and so this morning we moved the rest of them to the barn, and put in another lamp.

No, we’re not selling chick brooders! Just telling you the story of our new chickens.